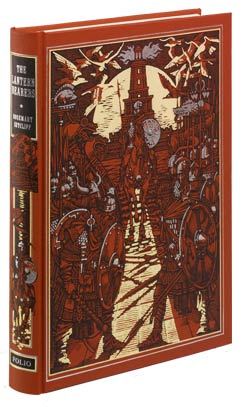 The Lantern Bearers by Rosemary Sutcliff

Rome – beset by barbarian hosts at her very gates – has all but abandoned the far-flung province of Britain. And there too, barbarian forces gather on all sides. In the East, Vortigern the Fox, has invited a Saxon war-band to his shores, granting them land, in return for their help in throwing off the yoke of Rome. Everywhere the rule of law and the fragile peace between the tribes is disintegrating, while the Saxon sea wolves raid deeper each year. Young Aquila, a commander in the Auxiliary Cavalry, is the son of a cultured and Romanised family – yet when the call comes for the last of the legions to leave Britain, he learns that in the end ‘he belonged to Britain’. And so he deserts the Eagle and returns to his family – but the storm he knew was gathering comes faster than they could imagine. Raiders kill his father, burn the farm and Aquila is carried off as a slave – not even knowing what has become of his beautiful, beloved sister Flavia. In the years that follow, Aquila will face great hardship and heartbreak, yet he will also find a leader to follow and a cause he can believe in. As his father once told him: ‘It is not so easy to kill a cause that men are prepared to die for.’

Winner of the Carnegie Medal, The Lantern Bearers is in many ways the most thoughtful of Rosemary Sutcliff’s Eagle of the Ninth Chronicles. In Penelope Lively’s specially commissioned introduction, she comments, ‘it is a work of her maturity, one in which she had already honed all her signature skills – her power of narrative, of pace, her way with characters, the rich evocations of a Britain that is gone but that she had recreated. It is full of the creamy surf of meadowsweet alongside crimson cloaks flying in the wind.’ It is also the book in which a truly British mythology begins to take shape. In the figures of Ambrosius and Artos, the two leaders fighting to hold back the Barbarian tide, Sutcliff has utilised a germ of the Arthur-legend. Penelope Lively comments, ‘this smoke-signal from a legend of the Dark Ages is one of the inspired touches that lends an extra veracity’. This edition is illustrated with beautifully composed, richly symbolic drawings from the award-winning Russian artist, Roman Pisarev, that capture the excitement of Sutcliff’s tale, from the heat of battle to the last transports slipping out of the harbour of Rutupiae.